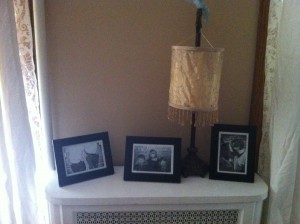 A glimpse of home – notice the newly painted wall behind the radiator! Thank you, Nolan Painting!

We’ve been busy tackling home projects this month and it got me to thinking about our home, our neighborhood, and what the trade-off is for living here.  If you had asked me eight years ago if I ever thought we’d be living in the town where we’re living, I would have said a big HECK NO!  In fact, eight years ago we were still living in Phoenix, Arizona and, I have to admit, I miss my sweet, little house.  But, we decided to pack up our house, our kids (33 months and 9 months old at the time), our enormous dog, and two adorable kitties at the end of the summer and drive back home to the East Coast.  We wanted to be around family, so that our kids could grow up knowing their aunts and uncles and cousins and all of the extended family that they never knew we had.

My brother, God bless him, let us live with him for an entire year before we made settlement on this home on June 30th, 2005.  It was, quite often, tense, and at the very end, ugly, BUT we are now closer than we have ever been and there’s not a day that goes by when we aren’t thankful and grateful for his generosity in housing an additional 4 people, a dog, and 2 cats for a year while we searched for a house.

So, anyway, we quickly realized that our dream house (read – home NOT in the town where we now live) was going to be tough to find on our teeny tiny budget – even with the sale of our home in Arizona.  We spent the better part of that year looking at houses – probably about 50 of them.  Whenever we put a bid in, someone else trumped us with a higher bid.  It was the peak of the housing market and quite discouraging.  Then, in May of 2005, our realtor Barbara, whom we had worked with for the entire year, passed away suddenly.  We had put a bid in on a house on Friday and we hadn’t heard from her, so when I called on Monday, I found out that she had died.  What a blow.  In so many ways!

(Side note:  At the same time, my mother was diagnosed with kidney cancer.  Seriously, May was not a good month.  Thankfully, the surgeon was able to remove my mom’s entire right kidney and she’s perfectly healthy and cancer-free today.  THAT was and is the biggest blessing of all.)

A few days later, the woman who took over our house hunting case took us to see a house across the street from the one we’d just lost the bid on.  Not a winner.  She said, “I have one more to show you.  It’s not even in the system yet.  The owner was going to rent it out, but decided to sell instead.”  She gave us the address and we followed her.  As we got closer to the street, I turned to Super Dad and said, I don’t even want to go in.  There is no way I want to live in this neighborhood!

Being more reasonable than I, he suggested we just check it out.  I trudged out of the car and was none too pleased let me just tell you.  When we stepped into the house, onto the enclosed front porch, the wretched smell of cat litter box engulfed us.  BUT – the front door was gorgeous, an original to the house and almost 100 years old.  And the hardwood floors?  Oh, they were pretty.  The woodwork?  All restored!  There were some cosmetic changes that definitely needed to happen, but, for the most part, the house felt more like home than anything we’d seen in a year.  And it was in our price range.  And, even more importantly, no one else knew it was for sale yet.

The next day I asked my dad to go sit with me a bit down the street from the house so that we could observe the neighborhood.  ‘Cause, sister, this is the hood by all Suburban Bred Girl accounts.  We sat, we watched, we waited….and the only thing we saw was an old Italian man park his truck and go into his house a few doors down.  It was quiet, it was a well-kept block, and, well, it was unexpected.

We put a bid in, it was accepted, and we ended up buying the house.  Saturday will mark 7 years since we made settlement and there are still some of those original cosmetic things that need fixing, but, it’s home.  It’s a relatively safe, quiet block and our neighbors are wonderful.  W.O.N.D.E.R.F.U.L.  We know them all and they know us and we take care of one another in the ways that neighbors do.  Sharing garden bounties, shoveling snowy sidewalks, cutting the tiny front lawn of a neighbor while we’re out cutting ours….that’s what we do.

We may not have jobs that give us hundreds of thousands of dollars, we may not live in a half-million dollar home, we may not have brand new cars, but Super Dad gets two entire months off each summer in addition to 2 weeks at Christmas and a host of other holidays for a job that he loves (and that will pay for all three of our children’s undergraduate education when they head off to college!), and I get to work from home teaching the kids and doing a job that I love.  It’s a trade-off.

We have a house that’s not quite so big and spend money fixing our old cars instead of living in a big house in an expensive area with brand new cars, but we have more time together as a family.  And we’re happy with our house, because it’s filled with love and laughter and happy children.  That’s a trade-off I’ll take any day.